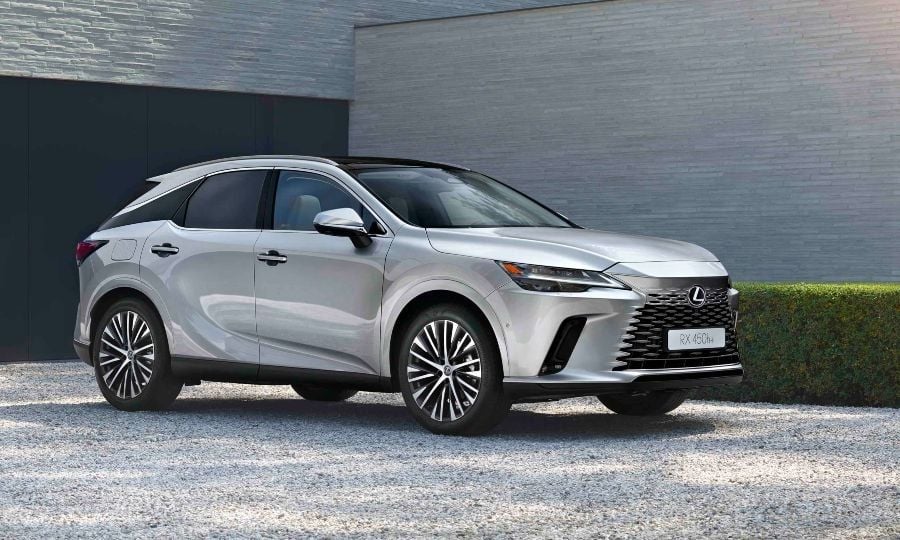 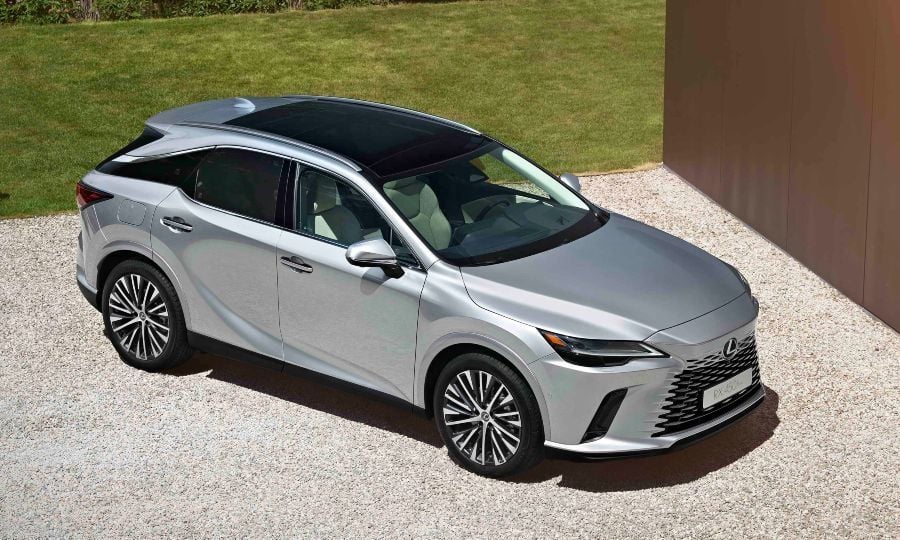 To achieve a bolder stance for the RX, Lexus designers extended the hood, lengthened the wheelbase and lowered the roofline. The slanted black rear pillar is now more three-dimensional. 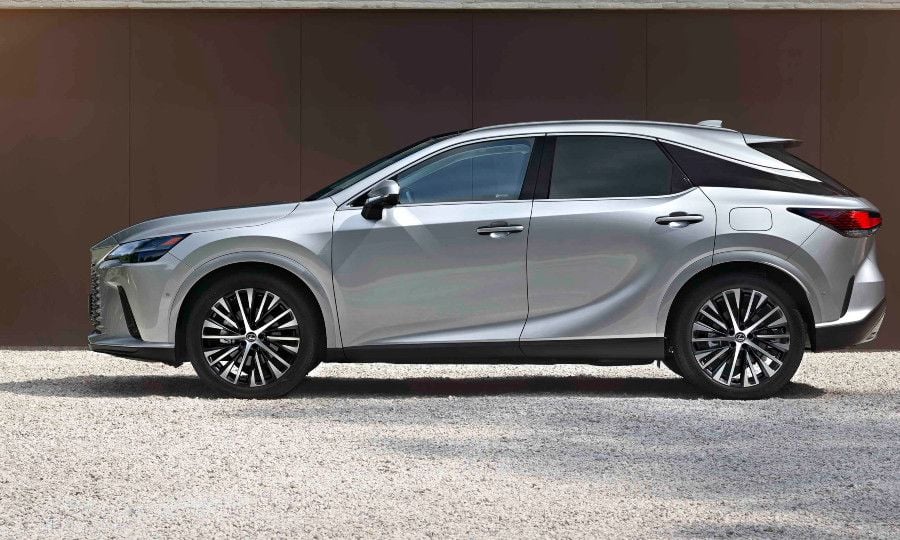 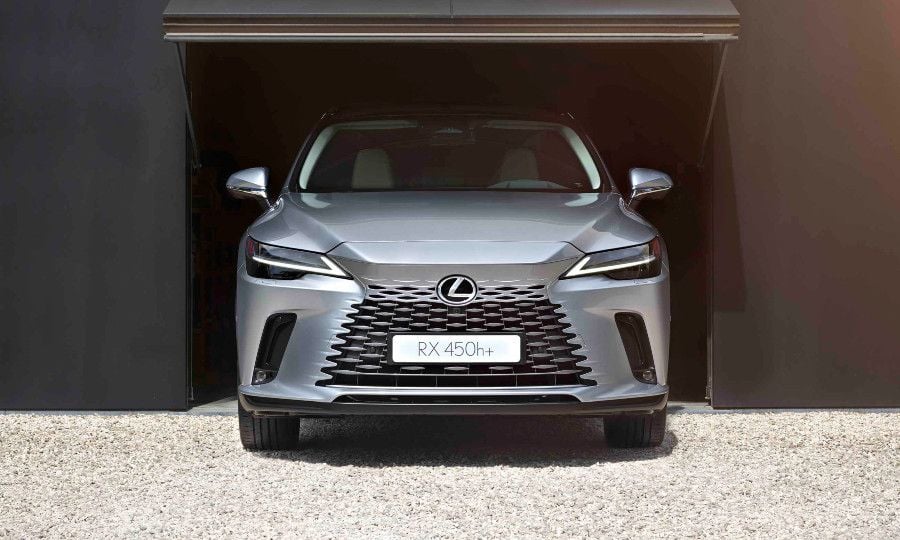 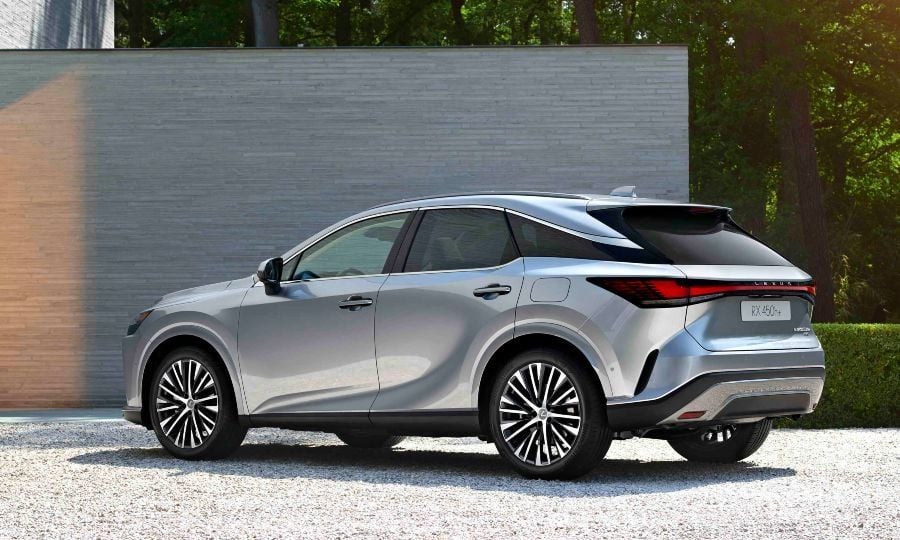 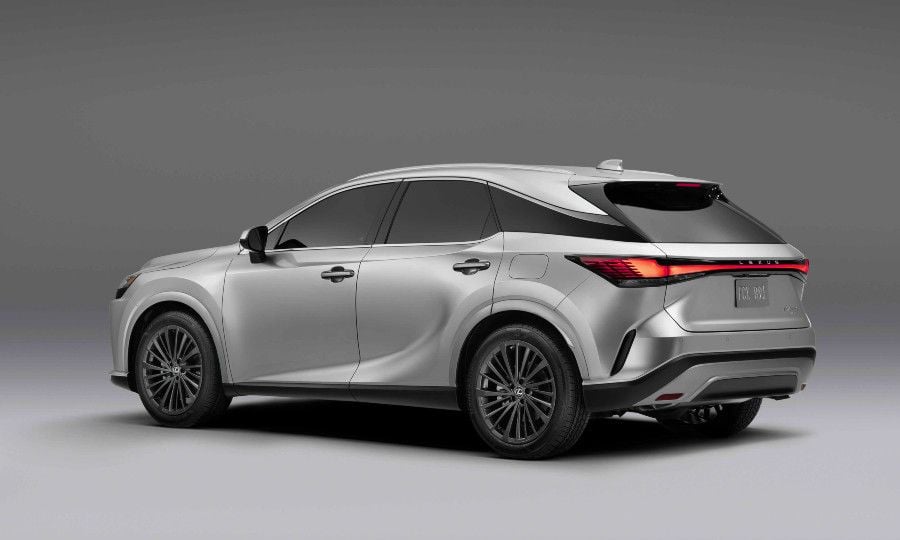 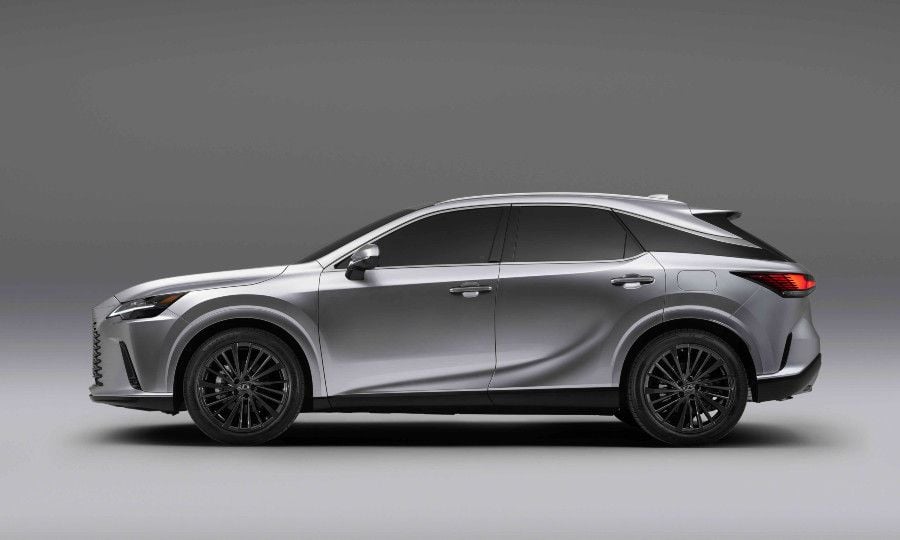 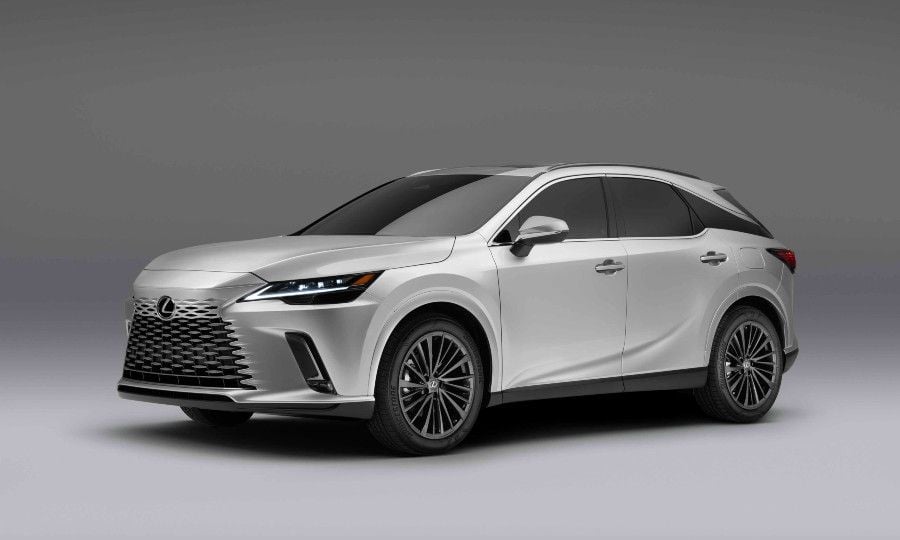 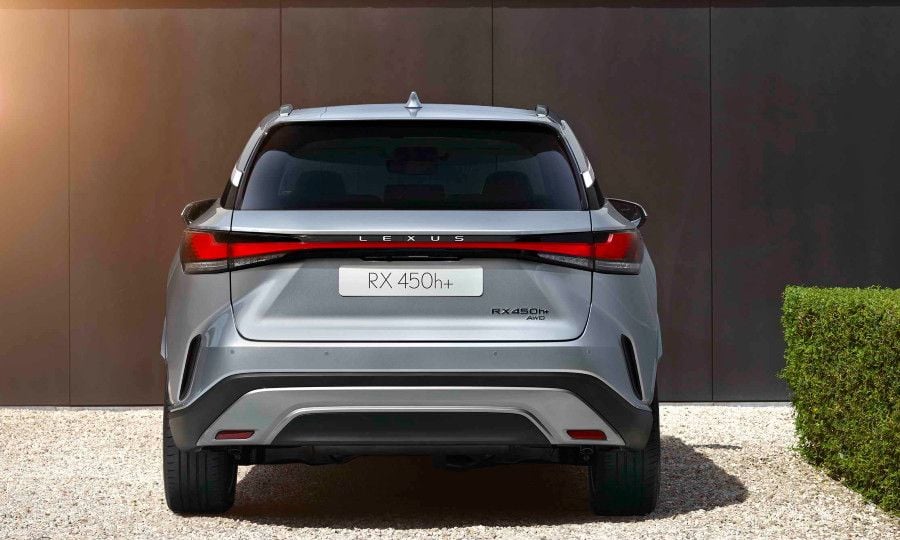 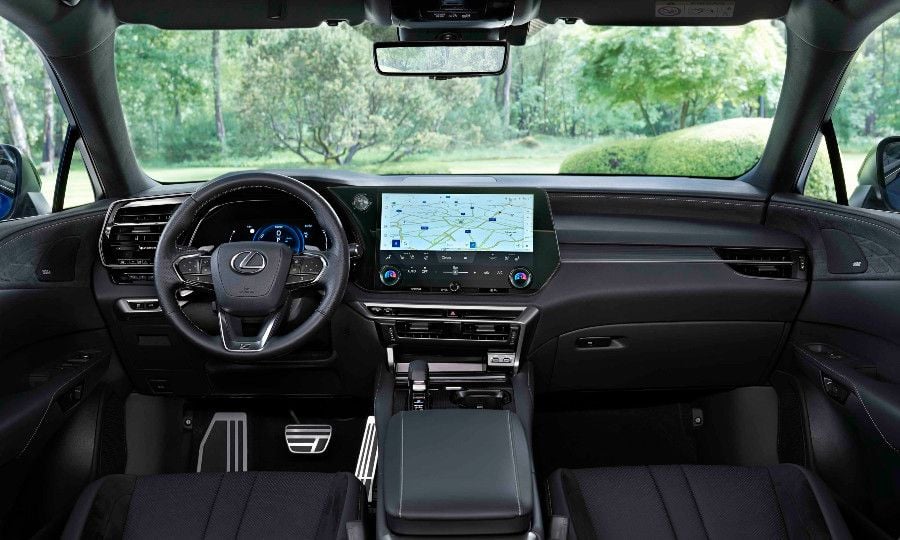 TOKYO — The next-generation Lexus RX, the top-selling family hauler that crushes the midsize premium crossover segment, leads Lexus deeper into electrification with a complete redesign that brings the nameplate's first plug-in as well as a fire-breathing F Sport turbocharged hybrid.

The fifth-generation overhaul, unveiled in Japan and at Toyota Motor North America's headquarters in Plano, Texas, repackages the nameplate on a new platform with new drivetrains that Lexus says will make the RX as fun as it is practical to drive.

For starters, the new GA-K architecture delivers a lower centre of gravity for more nimble handling while providing a longer wheelbase and tread for more legroom and cargo space.

And when it lands in North America this year, the 2023 Lexus RX will debut with four new powertrains as well as a new direction for Lexus design, deemphasizing the spindle grille.

"Nothing exemplifies our commitment to the transformation we're making as a brand and Next Chapter for Lexus product more than the renewal of our best-selling vehicle — the RX," Andrew Gilleland, Lexus Division general manager, said in a release.

"We're breathing new life into the segment-leading RX with enhanced safety and technology, human-centered design and undeniable performance from a diverse mix of powertrains."

Toyota Motor Corp.'s premium marque is banking on this redesign of the venerable RX to help rekindle the brand's sales momentum amid tight inventories and supply chain turmoil.

Lexus sales in U.S. declined 13 percent to 64,365 vehicles in first quarter, placing the brand No. 3 in the luxury sales race behind estimated top-seller Tesla and runner-up BMW. But RX sales, accounting for 42 per cent of the Lexus total, dipped just 4.1 per cent to 26,795.

In Canada, though, Lexus sales increased by 5.7 per cent to 5,095 in the quarter. But, the brand trailed Audi, Mercedes-Benz, Tesla and BMW in total sales.

The RX dominated the premium midsize crossover market in the United States, with nearly 11 per cent of the segment, outpacing the BMX X5 and rival Mercedes-Benz GLE/M-Class by more than 10,000 vehicles each. In fact, Toyota has sold 3.5 million RX crossovers globally since introducing the nameplate in 1998.

The RX still led the Canadian market in its segment, but not by nearly as much. While first-quarter sales were up 27 per cent to 2,262, it led the Audi Q5 by just 80 units.

The redesign also plays a critical role in Lexus' electrification goals. Lexus wants to transform itself into an electric-only brand in Europe, the U.S. and China by 2030, when it expects to sell 1 million EVs a year. And by 2035, Lexus aims to be ready to sell only full-electric vehicles worldwide.

Hence, the next-gen RX gets three electrified offerings in addition to the RX 350 gasoline model. The internal combustion entry has a 2.4-litree turbo engine and eight-speed automatic transmission for 275 hp.

The electrified options start with the RX 350h traditional hybrid, mating a 2.5-litre four-cylinder engine to an electric motor and continuously variable transmission to generate 246 hp.

Finally, there is a top-shelf RX 500h F Sport all-wheel-drive performance hybrid, combining a 2.4-litre turbocharged four-cylinder with a six-speed automatic and e-axle. It achieves 367 hp.

The RX 500h F Sport will be the second Lexus to get the brand's newly developed Direct4 awd system, using electrification to optimize front and rear wheel grip. The first vehicle announced with the technology was the RZ all-electric crossover unveiled in April.

Among other upgrades is a new multilink rear suspension for better dynamics, as well as increased rear body frame rigidity to improve feel during braking and acceleration.

The result is an evolution of what the brand calls the Lexus Driving Signature, a kind of driving character that strives to directly channel the driver's will to the wheels.

"The first challenge was to create a car that was fun to drive and one that could have dialogue with the driver," Lexus said in a release. "The Lexus Driving Signature involves a driving experience that provides an exhilarating feeling of seamless acceleration, steering, and braking according to all driving situations and aims for linear response faithful to the driver's intentions."

The new platform lowers the RX for a more planted centre of gravity and ground-hugging sporty stance, as opposed to the more upright and raised posture of its outgoing counterpart.

The newcomer also introduces a design direction that shifts the focus to a so-called spindle body design that sculpts a toned-down grille into the headlights. The spindle grille is still there, but the top portion is filled in and more integrated into the rest of the design.

The nose is more pronounced than the gently raked profile seen in the current version. The rear, meanwhile, gets a wraparound taillight bar with an L-shaped illumination motif.

Along the side, the redesigned RX keeps the same C-pillar kink seen in its predecessor and in the new RZ full-electric. But it refines the sheet metal creasing for a more subtle, streamlined aura.

Finally, Lexus engineers also turned their attention to the software side, loading the RX with the latest driver-assist technologies bundled into the Lexus Safety System+ 3.0.

The suite includes a pre-collision system with pedestrian detection and intersection support as well as a new motorcycle-detection feature. The all-speed dynamic cruise control also has a new curve-speed management system. And for those with parallel parking problems, Lexus has that covered, too. A new parking-assist function helps the RX squeeze in just about wherever it fits.

Sponsored Content: How to pass the family dealership to the next generation