The long-awaited North American start to VW's US$50 billion-plus investment in electrification, the ID4 will go on sale first in California later this year and other zero-emission vehicle states in America. While it will carry a sticker price of US$41,190 —including shipping but excluding any federal and state incentives — in the United States, Canadian pricing hasn’t been announced.

Initially, the ID4 will be rear-wheel drive and powered by a 201-hp motor attached to the rear axle, delivering 228 pound-feet of torque. Later versions will introduce all-wheel drive by adding a motor to the front axle, boosting the crossover to 302 hp.

The ID4 will be able to accommodate up to 125-kilowatt fast charging, enabling the battery to be recharged to 80 per cent from five per cent in about 30 minutes, the automaker said. Owners and lessees in the United States will have three years of free charging available to them through Electrify America's network of charging stations.

“Electrify America and Electrify Canada are two separate companies and we are still in discussions.  We’ve got more time to work on this, as the first vehicles are still many months away,” Volkswagen Canada spokesman Thomas Tetzlaff said in an email to Automotive News Canada.  “The U.S. will have deliveries starting this year, so they had to have everything buttoned-up well before we did.”

Production of ID4s destined for sale in North America is currently concentrated in VW's plant in Zwickau, Germany, where it is being outfitted with the 82-kilowatt-hour battery pack. Ultimately, production will be spread across five assembly plants: two in Germany, two in China and one in the U.S. When local production begins in 2022 in Chattanooga, the ID4 will be available with a smaller battery pack and with a starting price under US$35,000, said Scott Keogh, CEO of Volkswagen of America.

"The plan is to strike magic again: the right place, the right time, the right vehicle," Keogh said in an interview, referencing VW's storied history with the Beetle in the 1960s while discussing the ID4, which he said is the size of a Tiguan but drives like a Golf GTI hot-hatch. "If you look at the Beetle and what it did in terms of [its initial] price point, the newness that it brought to the marketplace at just the right time when the market was looking for that, and people said, 'Wow that company is kind of a little crazy!' And then, three years later: Boom. Cultural icon."

The ID4, built on the automaker's flexible MEB battery-electric platform, features a spartan interior dominated by a 10- or 12-inch infotainment screen, depending on trim level, a second, 5.1-inch instrument cluster screen mounted above the steering column, and an interactive light strip below the windshield that provides visual feedback to voice commands and driving information.

Some interior functions are controlled on the infotainment screens, while others respond to gestures. Voice commands can also be used to change most infotainment inputs, along with buttons with haptic responses on the steering wheel. Heated front seats are standard, as is the large panoramic glass roof.

A cellphone storage area in the centre console is capable of both wireless charging and connectivity, but it is worth noting that all four of the ID4's ports are USB-C, instead of the more ubiquitous and traditional USB-A ports found across most other vehicles. VW says that decision was made because the older USB-A ports are being phased out in favor of the more efficient USB-C design. 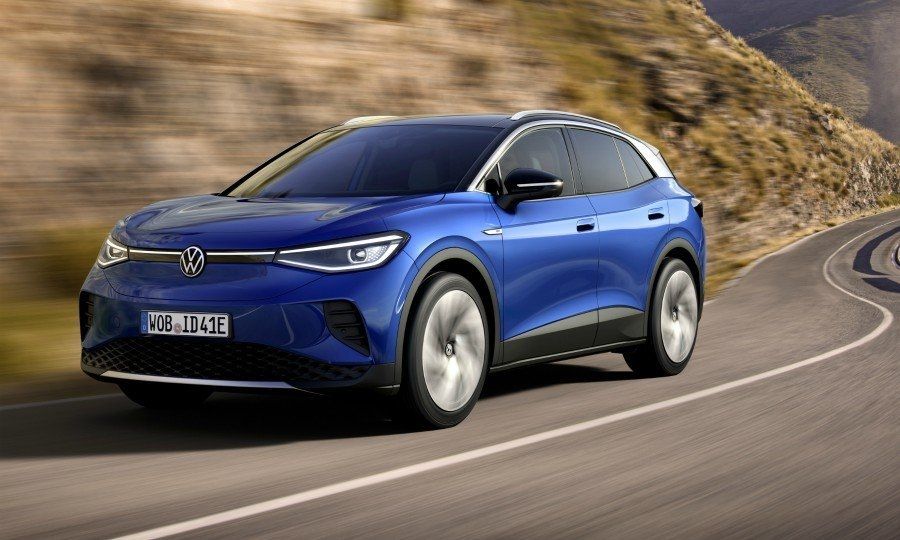 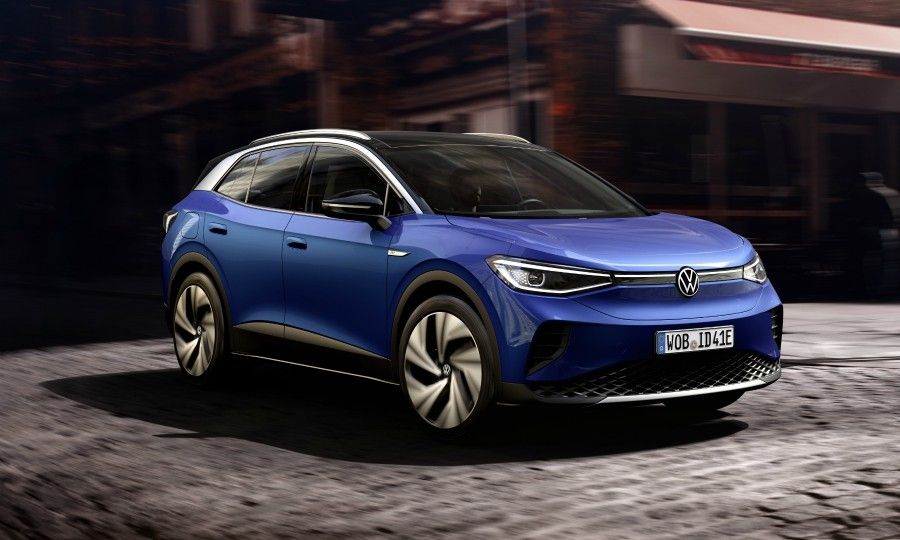 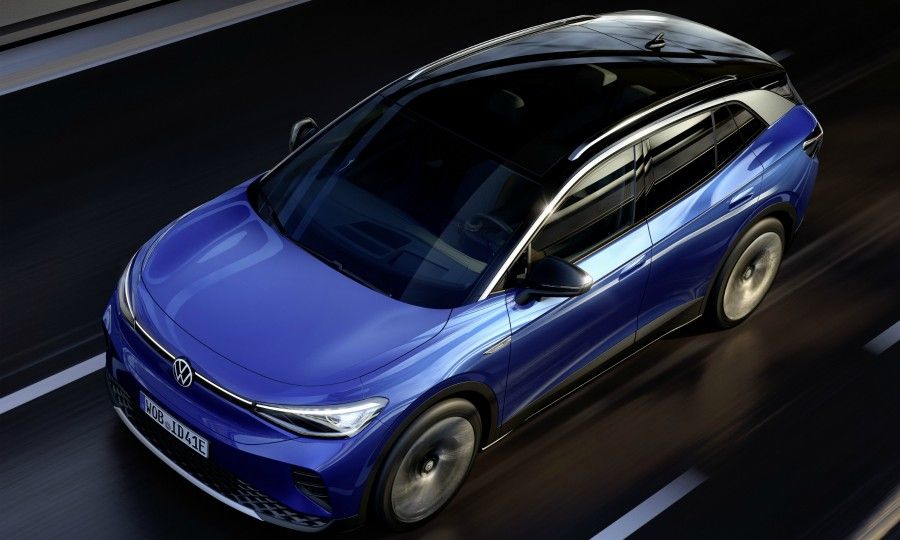 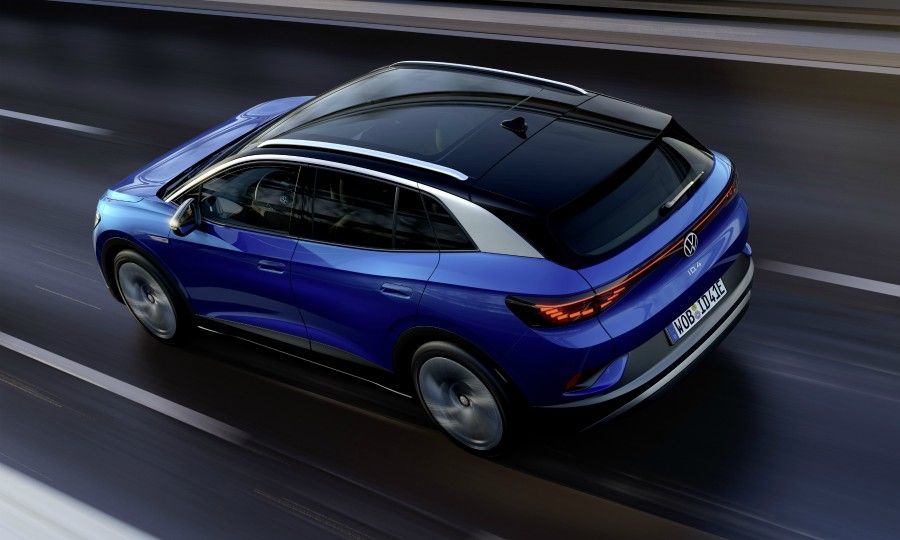 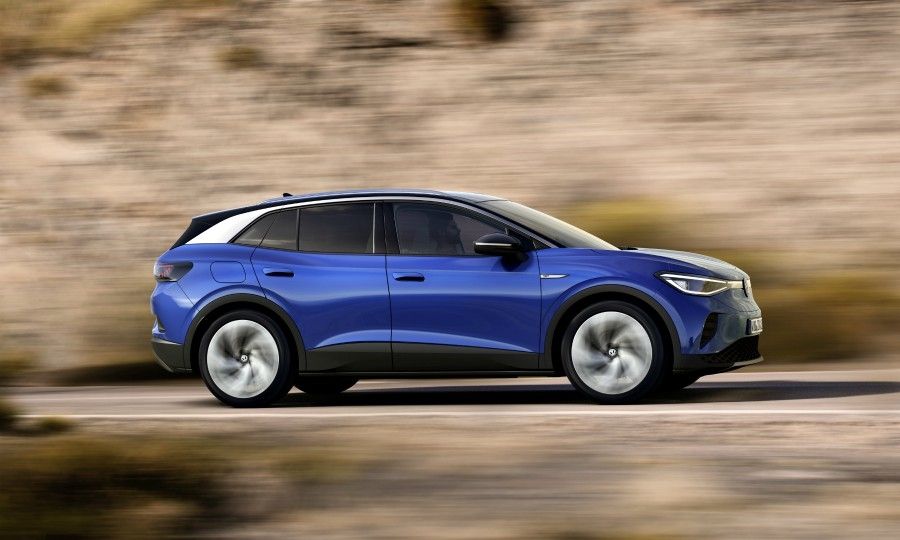 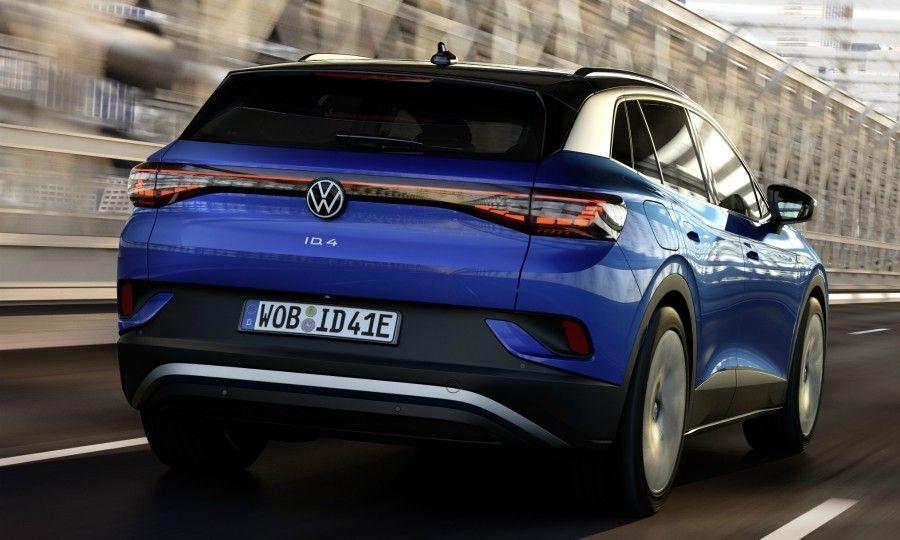 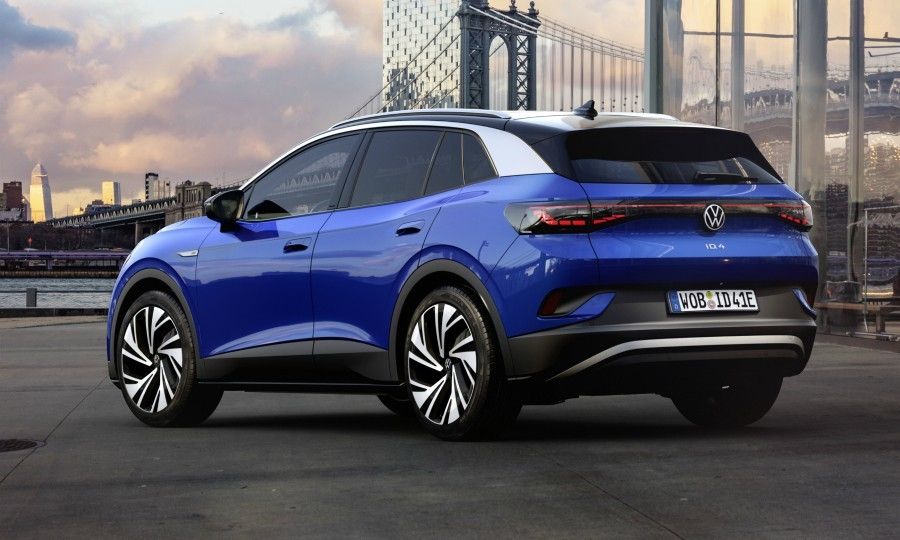 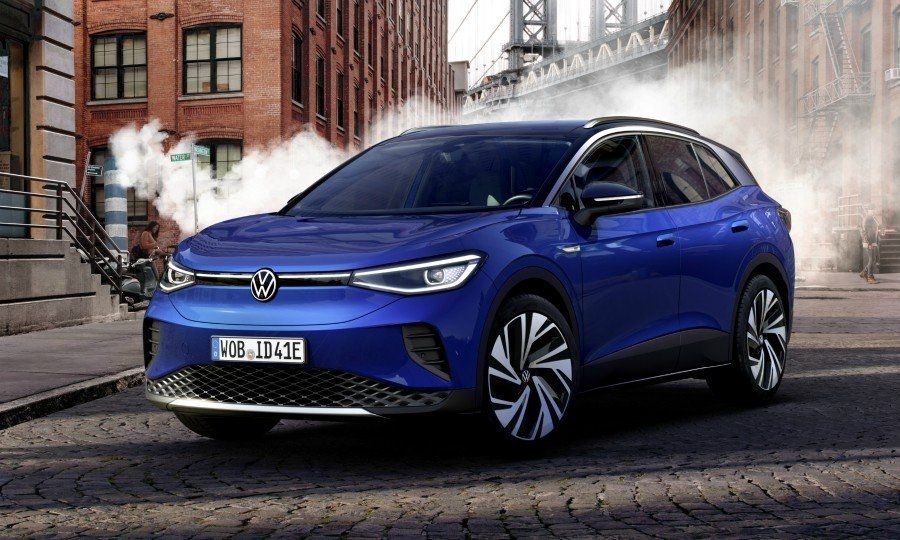 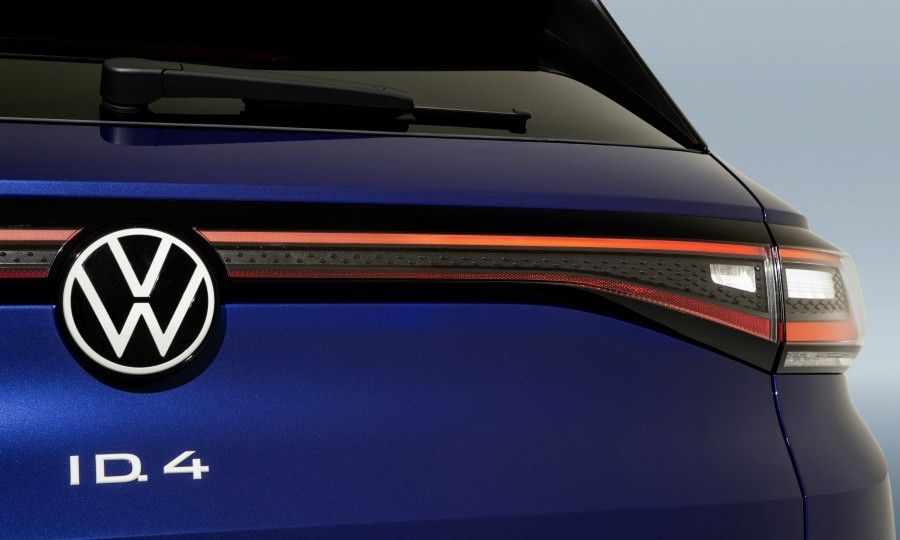 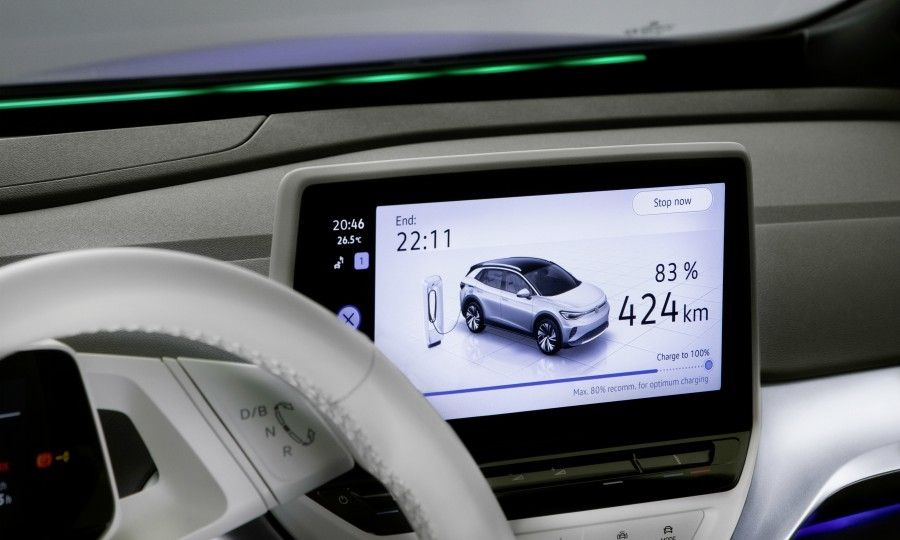 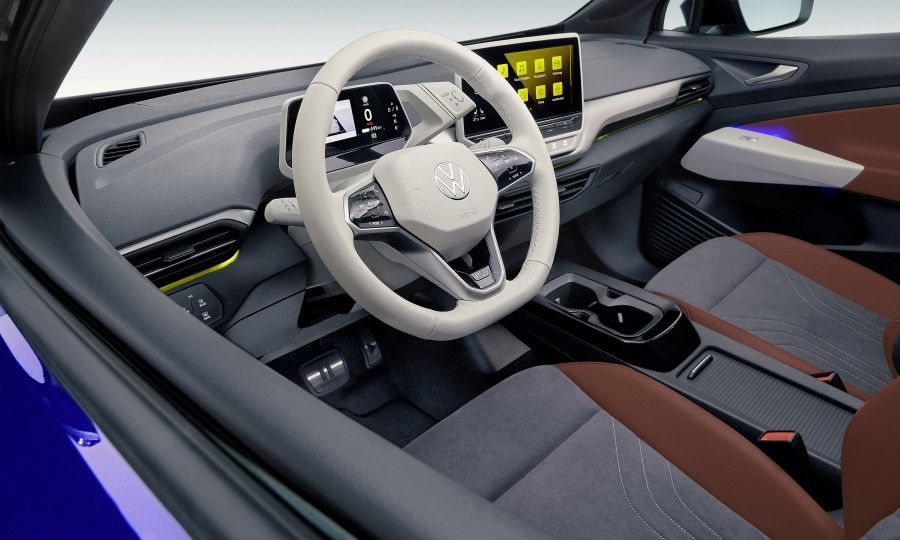 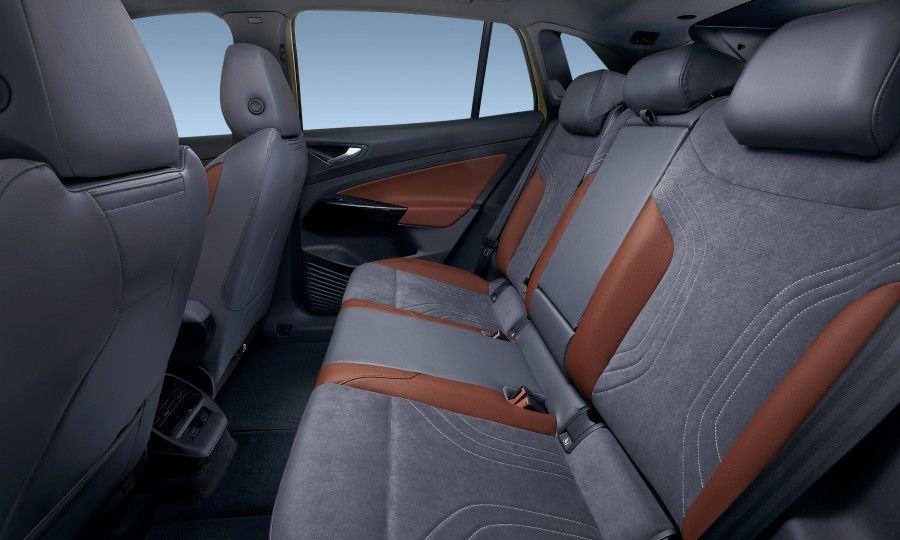 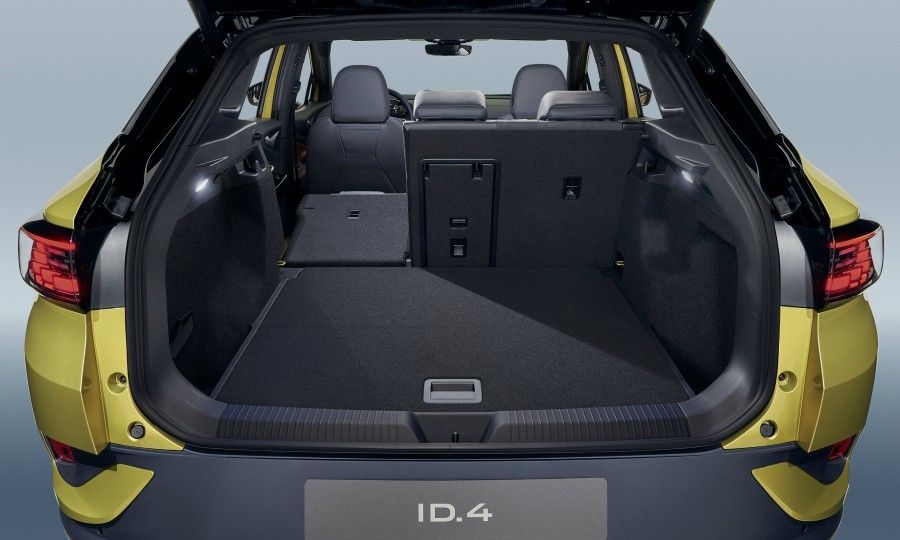 In terms of safety equipment, the ID4 will come standard with a suite of driver-assistance features, including active cruise control, lane-keeping assist and blind-spot monitoring.

The ID4's clean exterior styling picks up many of the cues from the Golf-sized ID3 battery-electric, which began its initial deliveries in Europe just this month but won't be sold in North America.

Like its older, smaller sibling, the ID4 features interactive exterior LED lighting elements that respond when the driver approaches. However, its aerodynamic shape — its drag coefficient is an impressive 0.28, in part because of its flush door handles — front fascia, roof rack and other exterior styling elements don't differ greatly from traditional combustion-powered compact crossovers in the segment. Except for the lack of a large air intake on the front fascia and a tailpipe in the rear, it would be hard for most consumers on the road to determine that the ID4 is powered by batteries and not an engine. That is by design, as VW's broader EV strategy is to make electric vehicles a normal and unassuming fixture on roadways across the world instead of attention-drawing oddities.

Unlike many competing EVs, the ID4 doesn't have a front storage area, or frunk, with designers instead focusing on maximizing room inside the cabin. Sitting behind a 6-foot-5 driver, rear legroom is ample, and storage behind the second row is 30.3 cubic feet with the seats raised.

"This car hits the sweet spot all over," Keogh said. "Name a car, honestly, that hits that package, at that price, at that range — frankly, it doesn't exist, so I think it's exactly right."

Refreshed Genesis G70 gets drift mode among powertrain tweaks
Sponsored Content: The Drive for Data: The Future of Automotive Marketing in a Customer-Centric World